In this example, we demonstrate how to set up client and server traffic generators with only one server and one client. (In the Scaled Server Case Study, we will show how the same procedure can be used for a significantly larger topology.)

This example has three events streams; the server stream, the client stream, and the cleanup stream.

The coordination between the events can be illustrated as follows: 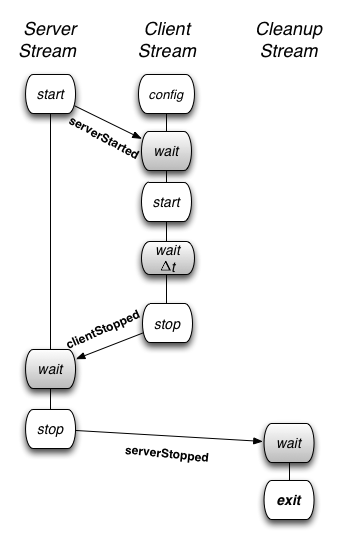 The exit state unloads and tears down all the communication mechanisms between the agents. The exit state is entered by the key target and is used to transfer control to a reserved state internal to the Orchestrator.

Here is the relevant AAL code:

Step 1: Swap in the experiment

Swap in the experiment using this network description file: casestudy_clientserver.tcl.

Assuming your experiment is named myExp, your project is named myProj, and the AAL file is called casestudy_clientserver.aal, include this in your environment:

Once the experiment is swapped in, run the Orchestrator using this AAL file: casestudy_clientserver.aal.

Once run, you will see the orchestrator step through the events in the AAL file. The example output below uses the project montage with experiment caseClientServer. The output will be as follows:

The experiment artifacts, the procedure and topology file that were used for the case study are attached below.

The recorded data is then pulled out by the [below mentioned] tools to create a traffic plot.

In order to populate the traffic data, re-run the experiment using the updated procedure file: casestudy_clientserver_monitor.aal. The corresponding logs are also available here.

The traffic may then be plotted in two ways:

A plot of the traffic on the link connecting the client and the server can be generated by the MAGI Graph Creation Tool. 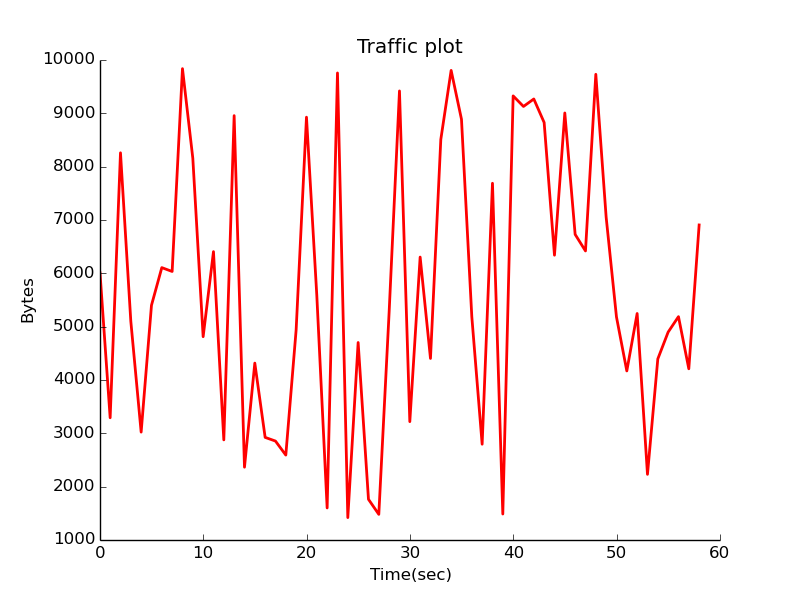 The database config node is as follows:

The procedure, graph configuration, and archived log files that were used for the visualization of this case study are attached below.

Now suppose you wanted to generate web traffic for a larger topology. We discuss how the above AAL can be applied to a topology of 55 nodes in the next tutorial.