This page describes basic information about DETERLab Containers and provides an overview of how to use it. More details are available in the Containers Guide.

The Containers system enables experimenters to create large-scale DETERLab topologies that support differing degrees of fidelity in individual elements. In order to create an experiment larger than the 400+ computers available in DETERLab Core, experimenters must use virtualization, simulation, or some other abstraction to represent their topology. The Containers system automates creation of virtual nodes to achieve desired scale.

The Containers system is built on top of the resource allocation that underlies the DETERLab testbed, extending it to provide multiple implementations of virtual nodes. Most DETERLab tools that run on physical experiments may be used directly on virtualized nodes. Experimenters find working in a containerized experiment very similar to working in physical DETERLab experiments. 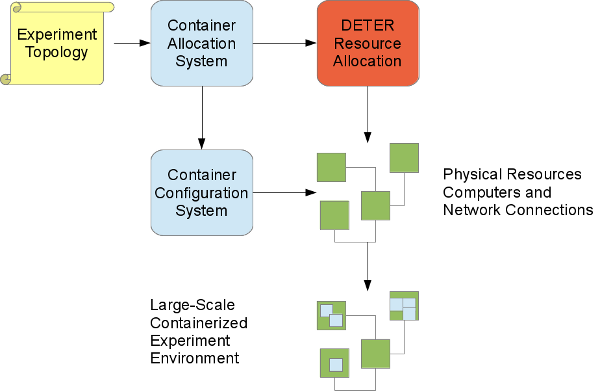 As in physical DETERLab experiments, the experiment's topology is written in an extended version of DETERLab's ns2 syntax, or in topdl, a topology description language.

Currently experimenters specify the type of container they want to use in their topology description.

The Containers system gives us a way to create interconnections of containers (in our sense) holding different experiment elements. A containerized topology might include a physical machine, a qemu virtual machine and an openvz container that can all communicate transparently.

The Containers system framework supports multiple kinds of containers, but at this point researchers may request these:

How Do I Use Containers?

In general, once you have a DETERLab account, you follow these steps. The DETERLab Containers Guide will walk you through a basic tutorial of these steps.

Create your NS file describing your large topology. Transfer the file to the "users.deterlab.net".

With these default parameters, containerize.py will put each node into an Openvz container with at most 10 containers per physical node.

3. View results by accessing nodes, modify the experiment as needed.

4. Save your work and swap out your experiment (release the resources)

As with all DETERLab experiment, when you are ready to stop working on an experiment but know you want to work on it again, save your files in specific protected directories and swap-out (via web interface or commandline) to release resources back to the testbed. This helps ensure there are enough resources for all DETERLab users.

For more detailed information about Containers, read the following: