In this example we demonstrate how to set up client server traffic generators in a larger topology.

This case study is identical to Simple Client Case Study except the topology is significantly larger.

As in the simpler case, this example has three events streams; the server stream, the client stream, and the cleanup stream.

The groups directive in the AAL file allows mapping an agent behavior to one or more nodes.

Additionally, we use YAML pointers to annotate the server_group as slist. The slist annotation is used to refer to the list of servers for configuring the client_agent in the section below.

There are two types of agents, a client_agent and a server_agent. Each agent description consists of at least three directives; group, path and execargs.

The AAL description is the same as the one used in the Simple Client case study.

Step 1: Swap in the experiment

Swap in the experiment using this network description file: cs55_topology.tcl

Set up your environment. Assuming your experiment is named myExp, your DETER project is myProj, and the AAL file is called procedure.aal.

Once run, you will see the orchestrator step through the events in the AAL file. The example output below uses the project “montage” with experiment “caseClientServer”:

The experiment artifacts, the procedure and topology file that were used for the casestudy are attached below. Additionally, we have attached a detailed orchestration log that lists triggers from the clientnodes and the servernodes in the experiment.

This process is the same as for the Simple Client case - we are reproducing here for your convenience.

In order to visualize the traffic on the network, modify the above mentioned procedure to add another stream called “monitorstream”. This stream deploys a packet sensor agent on the router node to measure the aggregated traffic between the server nodes and the client nodes. The packet sensor agent records the traffic data using MAGI’s data management layer.

The recorded data is then pulled out by the below mentioned tools to create a traffic plot.

The aggregated traffic can then be plotted in two ways:

Offline: A plot of the traffic flowing through the router node connecting the clients and the servers can be generated using the MAGI Graph Creation Tool. 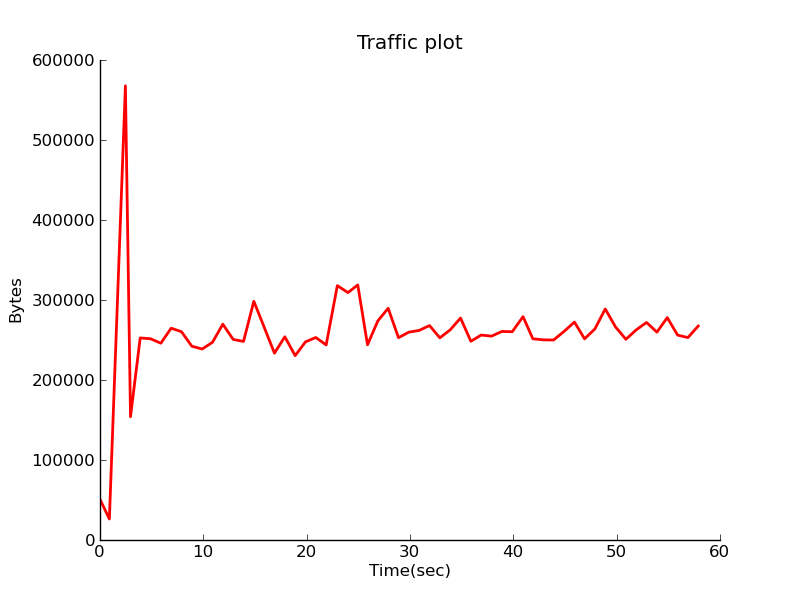 The procedure, graph configuration, and archived log files that were used for the visualization of this case study are attached below.