This case study demonstrates our system’s ability to do real-time feedback from the experiment using triggers. We show how information from the experiment may be used to extend the Orchestrator autonomy and deterministically control dynamic experiments. This is an example where the active state of an experiment is a driving input to the control. The data management layer too plays an important role in enabling the flow of information.

In this case study we show how, in a semi-controllable environment, the amount of traffic on a given link may be controlled using feedback from the experiment itself. The traffic on one of the links in the experiment must be maintained within a certain range; for this example, the range was 100-105 MB. We assume that the uncontrollable traffic on the link would not exceed the required maximum.

This experiment is set up with the following characteristics:

To demonstrate this case study, we set up an experiment topology similar to the one seen in the following figure, with 50 noise generating clients and 10 servers. We also tested a scaled up version of the experiment with 300 noise generating agents and 100 servers. However, due to the resource constraints on the testbed, we recommend you try this case with the smaller topology first. The scaling up of the experiment may be achieved with very simple modifications.

We use two kinds of agents:

Now, to synthetically generate uncontrollable traffic, the size of data requested by the noise generating clients is changed randomly. We set the probability of change as: 80% - no change, 10% - increment, and 10% - reduction. The amount by which the fetch size is changed is calculated randomly.

The Orchestrator, based on the real time traffic feedback, sends change load messages to the control client agent, in order to maintain the total traffic on the monitored link within the set limits. Event Streams

The groups directive in the AAL file allows mapping a agent behavior to one or more nodes.

Each of the server agent is used to start a web server serving garbage data of requested size. The noise agents are used to create the noise of the network. Each of the noise agent periodically fetches data of a randomally changing size from a ramdonly chosen server.

The server event stream consists of three states. The start state which generates a trigger, called serverStarted, once all the server agents are activated on the experiment nodes.

It then enters the wait state where it waits for a trigger from the noise stream and the client event stream.

Once the trigger is received, it enters the stop state, where the server is deactivated or terminated. Noise Stream and Control Client Stream

The noise and client event streams consists of five states. First, the agent implementation is parameterized by the configuration state. This occurs as part of the agent loading process on all the agent nodes.

The streams then synchronize with the server stream by waiting for the serverStarted trigger from the server nodes. Once they receive the trigger the agents are activated in the start state. Each agent fetches web pages from one of the listed servers.

Next, the streams wait for the monitorStopped trigger from the monitorstream. Once the trigger is received the clients are instructed to stop fetching data.

On termination, the agents sends a noiseStopped/clientStopped trigger that allows the server stream to synchronize and terminate the servers, which is done only after all the http client agents have terminated. Noise Modify Stream

The control stream starts once the control client agent has started. It configures the traffic monitoring agent and instucts it to start monitoring. Once the monitoring starts, this stream continously monitors the amount of traffic flowing on the monitored link, and based on the traffic information, instructs the control client to modify the amount of traffic it is pulling, in order to maintain the total traffic on the monitored link within the required limits. Duration Stream

Step 1: Set up your environment¶

Set up your environment. Assuming your experiment is named myExp, your DETER project is myProj, and the AAL file is called procedure.aal.

As this experiment requires a lot of nodes, we should try and use containerized nodes. Create a containerized version of the experiment using this network description file: casestudy_feedback.tcl

Step 3: Swap in your Experiment¶

Swap in the newly created experiment.

Once run, you will see the orchestrator step through the events in the AAL file. The example output below uses the project “montage” with experiment “caseFeedback”: 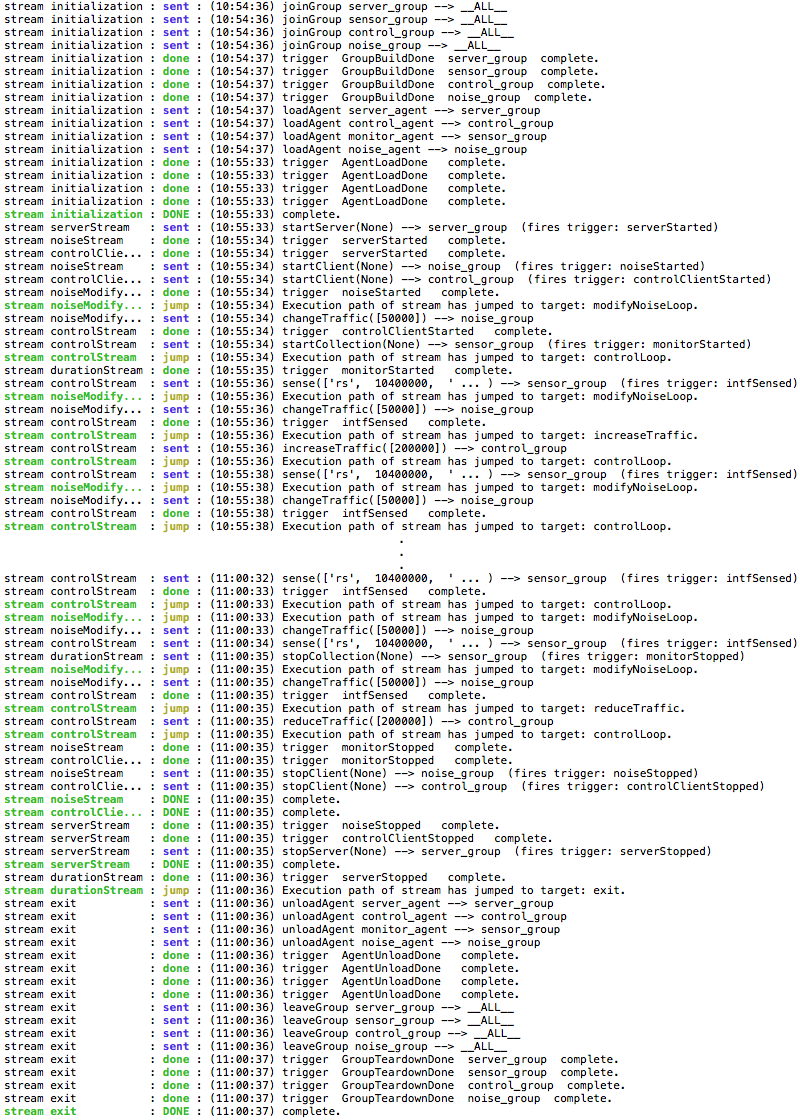 The experiment artifacts, the procedure and topology file that were used for the casestudy are attached below. Additionally, we have attached a detailed orchestration log that lists triggers from the clientnodes and the servernodes in the experiment.

Offline: A traffic plot may be generated using the MAGI Graph Creation Tool.

A similar plot using live data may be plotted by visiting the same web page, and additionally passing it the hostname of the database config node of your experiment.