To use network emulation, you need to represent your topology as a list of edges. Some edges may have attributes, such as bandwidth and delay associated with them. To specify nodes that will not be modeled on a Click router (enclave nodes, usually at the edges of topology) preface their names with the letter "e", like "e1". Nodes that will be modeled on a Click router are denoted by numbers (e.g., 1 2 represents an edge between node 1 and node 2). Attributes for an edge are specified in a json format (attribute: value) following the edge.

For example, the following edge-list file represents a topology of two enclaves (one node each) and two core nodes with some edges between them (no attributes):

The resulting topology is illustrated in the figure below:

Here is another edge list example, which represents a topology with three enclaves and three core nodes. Some edges have defined attributes (in json format) like bandwidth and delay.

The resulting topology is illustrated in the figure below: 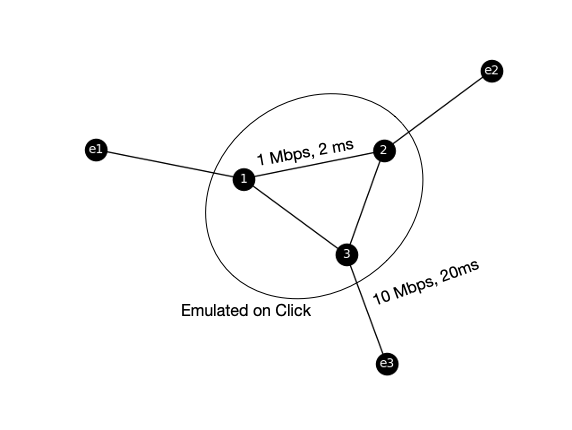 Now please proceed to the tutorial to see how to generate NS files and Click templates from these basic topology models, and validate them on Deterlab.