Setting up IP routing between nodes

As DETERLab strives to make all aspects of the network controllable by the user, we do not attempt to impose any IP routing architecture or protocol by default. However, many users are more interested in end-to-end aspects and don't want to be bothered with setting up routes. For those users we provide an option to automatically set up routes on nodes.

You can use the NS rtproto syntax in your NS file to enable routing:

where the protocolOption is limited to one of Session, Static or Manual.

where the dst can be either a node, a link, or a LAN. For example:

Note that you would need a separate add-route command to establish a route for the reverse direction; thus allowing you to specify differing forward and reverse routes if so desired. These statements are converted into appropriate route(8) commands on your experimental nodes when they boot. 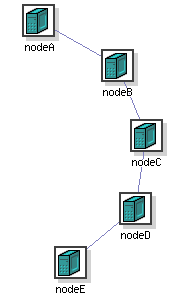 you would receive an error since DETERLab staff would not easily be able to determine which of the two links on $nodeD you are referring to. Fortunately, there is an easy solution. Instead of a node, specify the link directly:

This tells us exactly which link you mean, enabling us to convert that information into a proper route command on $nodeA.

The last form of the add-route command is used when adding a route to an entire LAN. It would be tedious and error prone to specify a route to each node in a LAN by hand. Instead, just route to the entire network:

In general, it is still best practice to use either Session or Static routing for all but small, simple topologies. Explicitly setting up all the routes in even a moderately-sized experiment is extremely error prone. Consider this: a recently created experiment with 17 nodes and 10 subnets required 140 hand-created routes in the NS file.